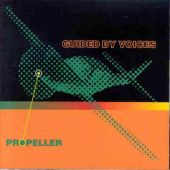 Two words: Weed King. Guided By Voices' breakthrough album Propeller is one stadium track after another. Other than one throwaway, Propeller is great all the way through, and any fan who claims it is the ultimate GBV album would have some choice cuts to back that claim. Not quite totally lo-fi yet, Propeller is the nicest sounding album until Under the Bushes Under the Stars shows up in 1996. Did I mention Weed King yet? This song has the greatest claim to the Best of album released in 2003 of those tracks not selected. A song with four distinct parts that build on top of each other until the very end when you are left helpless against the urge to play air guitar while Pollard sings "for the dreams of the Weed King we all sing"...

As great as Weed King is, there are also some also excellent songs on Propeller. It kicks off with the brilliant Over the Neptune/Mesh Gear Fox. The first part (which fans will recognize as Kisses to the Crying Cooks from Fast Japanese Spin Cycle) has The Who written all over it (you can actually see Pollard do an air kick when he yells "Hey!"). The latter half of the song is a beautiful power ballad. Together they clock in at over five minutes, and are definately a GBV epic.

Quality of Armor has a great chorus, and shows off Pollard's pop genius. Lethargy is a heavy, ripping minute and a half which has Pollard belting "Lethargy!" over and over during the last twenty seconds. Unleashed! The Large Hearted Boy is GBV's take on a punk song. It has an extremely catchy bassline, and brooding vocals.

Slowing down the album is the eighth track, Red Gas Circle. It took a while, but the song has grown on me. When Pollard starts singing "Hey are you coming?/Please don't be late", the song becomes simply beautiful. 14 Cheerleader Coldfront has multiple vocals (Pollard and Sprout?), and is another gorgeous GBV acoustic track. It may have fit better on Vampire on Titus with its poor recording quality, but has since become a fan favorite track. According to Pollard, this is the only track that he and Tobin Sprout actually sat down and worked on together.

Back to Saturn X Report is extremely frustrating as it is a bunch of clips from which appear to be really good songs (including an early version of Buzzards and Dreadful Crows). I understand that some of these songs can be found in Suitcase and other places. Circus World is another pretty cool song. Soft verses mixed with a kick ass chorus, and some cool guitar soloing at the end.

Particular Damaged is a throwaway, plain and simple. It is actually hard to listen to the whole thing, and that is a shame because the rest of the album is so good. That leads me to two more of my absolute GBV favorites:

Some Drilling Implied has the best opening in the GBV canon. It starts off with a slow, pulsing bassline and pounding drums. And when Pollard belts "The new corn belt" (from gbvdb), it starts all over again. This is one of my favorites. The other track I'm talking about is Exit Flagger. The last all-out rocker played live by Guided By Voices (maybe due to its simple four chord structure which makes it easy to play drunk), it has been a concert staple since its creation. Everything about this song is simple, and that is what makes it great.

Propeller is mind-blowingly good. It is an essential member of any GBV collection, and should be one of the first purchases for a new fan. Over the Neptune, Weed King, Exit Flagger, Some Drilling Implied, 14 Cheerleader Coldfront; this album is full of great songs.

OK, "Exit Flagger"...great tune evidencing significant Who influence (listen to "Jaguar" from numerous bootlegs and a couple of legit releases to see where I'm coming from...), love the straight-ahead first-take-is-the-only-take feeling about this song, the chorus is singalong fanfuckintastic...and the drums....the drums...reminds me of some liner notes I read on the James Brown greatest hits #2 disc...apparently on "Night Train", I think, James was just being his ol' antsy hyperactive self and didn't want to wait 'til his drummer came back from the can to lay down the track...he jumped behind the kit, counted it off and kicked his band in the ass! Can't ya just see Pollard doing the same here? He's got this great idea for a song, but Thrasher's out smokin' (something!), so he just jumps in and kicks it out! Could that explain the absolutely AWFUL completely out of sync drums towards the end? Or would that be the so-called "Miller LIght" effect?

Oh, you've got to go back and give "Ergo Space Pig" another shot...I lump it with a genre or cadre of songs on this album, songs I call "Bob's wonderful world of punk", songs like "Lethargy", "Some Drilling Implied" and "Unleashed...!" which I hear as different sorts of punk-sounding songs. I love the way "ESP" finally materializes out of "Back to Saturn X..."; at first sounding like another short thing, and then just plowing forward with an insistent rhythm and a reedy, off mike, snotty sounding voice...this thing sounds like it was recorded in a basement because it WAS.

And again, I have to wax poetic about the guitar solo...one of the wackiest-sounding wah-wah solos I've ever heard, I just love the sound quality of the guitar. Have you ever heard any other guitarist make that sound with a guitar before? No, and Tobin (I assume he's playin' lead) invents lots of cool new ways to make guitars sound...that's what makes GbV SO GOOD.

Anyway, Ergo Space Pig makes me hop around my room like I'm back at La Merer Vipere in 1977...and that has to be good!

Oh yeah...one more thing...doesn't this song sound like something the Violent Femmes would jam on down in their basement?

More on "Propeller" (I've been listening to it alot, as you can see).

I'm really digging "Particular Damaged", not the least for its grammatically challenged title. Also, it sounds like a really retarded, off the deep end version of "Magic Bus" done Live at Leeds style, with that chukka-chukka Bo Diddley type guitar. How Bob channels all this rock history through a demented little number like this I'll never figure out, but he does it and we're all the luckier for it!

But I'm really getting sick of the stadium guitar solos in "Weed King" - I know that's virtual heresy in these parts, but hey, I think it just makes the song ordinary. I'm not really into "stadio rock"...I could listen to a Judas Priest disc if I wanted that sort of crap. Ditto for "Metal Mothers", a song that I find quite ordinary, also. Oh well...at least "Lethargy" follows it.

and finally, check out the alternate version of "Some Drilling Implied" on the Demons and Painkillers disc from "Hardcore UFOs". Pretty similar music tracks, but Bob really gets into the vocals...talk about sucking it up annd winning the game! Bob's a fucking pro!

Yeah, that solo in Ergo Space Pig is off the wall, and I also like the acoustic part near the end. This was back when I didn't say anything about songs that didn't make the list.

I do keep a "to re-visit" list which I will likely go through when I near completion of these posts. ESP is on it.

forego is my witness said...

"I wish I could give a shit--just a little bit!"

I'm with Jazman on saying that I don't quite get the general awe over "Weedking". it just really doesn't do a lot for me. And i don't even have a problem with arena-ready GbV--i think some of those tracks are actually quite great. But I really don't get the wide fascination with Weedking...?

Yeah... Weedking id probably the most overrated GbV song. I just don't see much in it at all.

This review made me go back and reconsider a few songs I had written off a long time ago. Ugh, Back to Saturn X and Lethargy are still just kind of bad and annoying. I can't do it.

Funny thing is that Back to Saturn X Radio Report eventually really clicked for me. Having heard the full versions of a lot of its component songs, I really feel that it actually distilled them down to their best parts, and the punchy mini-suite made up from them just sort of works.

Except for the Chicken Blows snippet. Chicken Blows sounds completely out of place with those songs even to me if I listen to it as a whole, though. It's too ingrained as being an Alien Lanes track for me.

First, let me tell you one thing: amazing blog! Now, talking about the record, in my opinion not only this was the first truly great GBV album, but to me this stands as their magnum opus, along with the next one "Bee Thousand". Pure pop genious drowned under screeching guitars, feedbacks, tape-manipulations and other marvels. This is Paul McCartney at his best fronting some early 90's Low-Fi/Noise Pop band. A magical box full of gems like "Weedking", "Quality of Armor", "Metal Mothers", "Unleashed! The Large-Hearted Boy", "Exit Flagger", "On The Tundra"....One of my favourite albums of the '90's.

Pardon, the next one was 'vampire on Titus', which I love but to me was a little bit inferior to this and 'Bee'. Kudos

Quite possibly their best set of songs, but the sequencing could do with a bit of tweaking: Weedking is too similar in tempo to follow Mesh Gear Fox, imhotep. Also, Weedking into Exit Flagger is the segue of all segues (try it; you'll like it) but on the record we get Professional Damaged instead; the third slow one in a row. Minor quibble, mind.

The reason for leaving out Some Drilling Implied & Unleased! The Large-Hearted Boy is that I prefer the live versions from Cut-out Witch.

It's harder to explain the other omissions: I like On the Tundra, Metal Mothers and Circus World a lot too (the latter's lyrics in particular), but to me they have a different feel and would sit nicely on a record with songs like The Terrible Two, Bunco Men, Cruise and If We Wait. Not that those are even that similar. I know it doesn't make sense; I'm not guided by logic, am I?

In an attempt to create the ultimate Robert Pollard playlist, I (The Rock Robot) go through all related releases (Guided By Voices/Robert Pollard solo/etc.), and reviews each item. I hope that new fans of GBV/Robert Pollard will find this a handy guide. This project was started on Dec.12,2005 and should go on until all Robert Pollard releases are covered.

Other Posts on this Blog