Guided By Voices: Clown Prince Of The Menthol Trailer (1994) 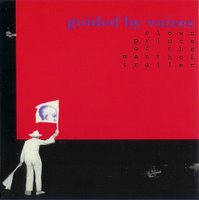 I finally received my copy of Clown Prince. It turns out that I got it from Amazon, as a pre-order where you set up how much you are willing to pay for something, and the moment someone posts selling the album at a price under your max, Amazon automaticaly purchases the disc for you. Therefore, it came as a complete surprise when I got an email from Amazon saying, "thank you for your purchase of Guided By Voices - Clown Prince of the Menthol Trailer EP". After a couple of listens, I am under the impression that Clown Prince is the worst of GBV's stunning EP's, though it does have its charms...

Quite possibly the most popular track from Clown Prince is the first one, Matter Eater Lad. This song is actually available for free off of GBV's homepage. It is a fun little minute long punk-infused track (kind of reminds me of The Clash). The chorus of "Yeah he's mad, he's matter eater lad" is pure genius. It may be the greatest minute on this ten-minute EP.

The other real keeper here is Johnny Appleseed, another often played live track. I would love to hear this particular song re-done with a more studio sound, because it truly does have a great melody. The verses are beautiful ("You're a breath of insulation in my draftic attic brain/You're sweeter than the sweet cream buzzed on sugar cane"), and the chorus of "you're so cherry" has Tobin Sprout helping out Pollard on vocals. Though picking this song for the playlist is a no-brainer, I am also thinking about adding the live version on Live at the Wheelchair Races, which includes some distorted guitar starting at the second verse.

Those two tracks are definately the highlights of the EP. The rest of the EP does not come even close to reaching those two. [Note: After writing that last line, I popped in The Electrifying Conclusion DVD in order to check out Pink Gun, Johnny Appleseed, and Matter Eater Lad, and ended up watching the whole damn thing. So now, the conclusion of this entry...]

Single simple guitar riffs which have a rustic sound to them are the focus on Broadcaster House, Hunter Complex, and even the way-to-short Pink Gun (which I'm guessing was a surprising inclusion at the final show). Hunter Complex's vocals are extremely hard to hear, though the riff is fairly neat. Scalping the Guru (which was also the title to an aborted album) sounds more like an intro to an album than an actual track on its own. Lastly, Grandfather Westinghouse (which has a cool title), is also follows the simple single guitar riff structure, except for twice the length, a whole two and a half minutes.

This is the worst (or least good) GBV EP. However, the inclusion of Matter Eater Lad and Johnny Appleseed make it worth the purchase (assuming you can find it for about $15 like I did). It may be possible for the other tracks to grow on me some more, since I did this review after listening to the EP maybe only three or four times. However, for now only the two tracks make the playlist.

Worst GBV ep? Jeez i really can't agree with you there, i know its all a matter of personal taste with these things but i think this thing is seven inches of perfection, i would take this stuff over the later GBV stuff (even though its all brilliant!). Pink Gun is one of the finest post punk songs ever, an absolutely killer song tossed aside in thirty seconds, absolute genius.

I was waiting for this post, and I'm happy you made it, as it is further proof that every GBV-related release has tons of fans! I have to admit that I did the entry for this EP fairly soon after getting it, so I did not have as much time to digest it (as should be done with GBV releases). I was just so happy to actually get a hold of a copy! However, I stand by my statement that it is the worst GBV EP (at least, the worst considering my initial reactions on first listens). Perhaps I will change my mind about this in the future...

CPOTMT is defintely no masterpiece but I have a soft sopt for "Broadcaster House" for some reason, as well as the songs you highlighted. "Pink Gun" too, I guess? Sounds like they were more interested in seeing how many tracks they could cram onto a 7" rather than actual quality control if you ask me though...! IBx

Matter Eater Lad is so good. So good.

I'd like to second those who said that Broadcaster House and Pink Gun should get another shot. Both of them are great little songs.

it's lost in the piles of cds on shelves and in boxes, so i can't listen again...but this was the first thing of theirs i bought, in 1994, before 'bee thousand' had come out over here in the uk. i have a fondness for it because it tumbled in, requiring a complete refocus to get it. i seem to remember 'matter eater lad' affecting me like falling down stairs, and 'johnny appleseed' lying in a daze at the bottom. it's great, and so is 'grandfather westinghouse'. it led to 'bee thousand', then 'fast japanese spin cycles', the 'vamp/propeller' twofer, that birthday live double vinyl, 'box', and a real pile of other stuff until it all became too much after 'do the collapse'. i've just finally got round to reading the james greer book and have (naturally) ordered loads more new-old stuff as a result. just came on here to find out if 'selective service' was any good! great resource, by the way. thanks.

I'm with you on this one, except I'd hit the bar if they'd play Johnny A live.

Matter Eater Lad is truly essential though, and Pink Gun is a lot of fun in very little time.

In an attempt to create the ultimate Robert Pollard playlist, I (The Rock Robot) go through all related releases (Guided By Voices/Robert Pollard solo/etc.), and reviews each item. I hope that new fans of GBV/Robert Pollard will find this a handy guide. This project was started on Dec.12,2005 and should go on until all Robert Pollard releases are covered.

Other Posts on this Blog